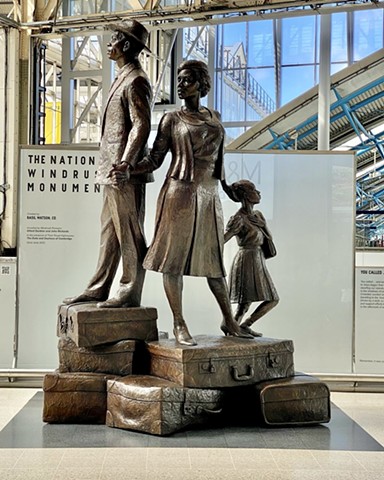 It was an honour to create this monument which pays tribute to the vision of those Windrush Generation migrants from the Caribbean as they arrived in Britain with their dreams and aspirations, courage and dignity, skills and talents. They arrived with the idea of laying a foundation for their families and their future, and a hope of contributing to a society that they expected would welcome them in return. From this auspicious beginning they spread their culture across Britain influencing many aspects of the society. It is their strong dependence on family and the resilience born of the culture that they brought with them that has sustained and lifted them up.

The reality was, for the most part, a far cry from expectations, but the dignity with which they faced their reality never diminished.

The profound significance and importance of the Windrush Monument can be felt in the excitement and anticipation of the people of Great Britain. Not just people of Caribbean decent, but of all sectors of the society.

My parents, along with a great many others, took the long arduous voyage from the Caribbean with very little or nothing other than their aspirations, their courage and a promise of opportunity for advancement. This monument tells that story of hope, determination, and a strong belief in themselves.